In everything from sandwiches to dipping chicken nuggets, to lathering on Venezuelan arepas to just straight up licking the spoon. This sauce is magical.  Full of flavor and really well, green.

I’ve tried many ways of making this sauce, and although I’ll share those as well (because let’s be honest, all garlic cilantro sauces are delish), this one is my hubs’ favorite so far.

The base is Mayo, which I know sounds a little “eh”, but I assure you, it’s good.  We’ve even thrown a little into our salads as a dressing of sorts.  Healthy? not so much.  Delicious? You betcha!

However, leave it to me to complicate it all the way.

The very first time I made this wasn’t pretty.  I guess it can only be described as an EPIC FAIL.

I misread the recipe and instead of adding one handful of cilantro, I added the whole thing. Like the whole bunch.  Minus the stems.

Because that seemed weird, but throwing the whole thing in the food processor didn’t.

As soon as I started that blender, I knew something was extremely off.

This wasn’t a pretty light green color.  This was bright green.  Like grass green.  Only brighter.

It definitely did not look like anything anyone should be putting in their sandwiches, let alone eating! And when we tasted it? Yeah, it wasn’t pretty or tasty!

Since then, I’ve played around with different combinations of flavors (including adding FAR LESS cilantro in my sauces).

I love having a light cilantro taste with a stronger garlic flavor. That does the trick.  Salt plays a huge role here.  Makes it mind blowing delicious.

Don’t underestimate the power of salt, my friends.  It works wonders!

Alright well, I’ll drop the recipe below then go downstairs to make myself a sandwich with some of this stuff.  ♥

If you make this recipe, be sure to tag me on Instagram or hashtag #toeatdrinkandbemarried.  I’d love to see what you make! 🙂 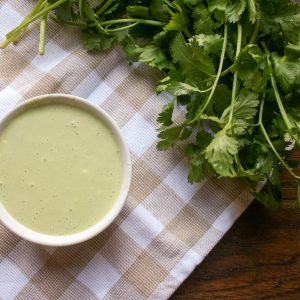